Madison teens work with a variety of Bubbler artists to create collaborative collages. Sometimes the collage is the result of a meaningful discussion and sometimes it is the result of cool supplies.

The middle school group from Vera Court Neighborhood Center stopped by Lakeview Library three Fridays in a row to create a sign and a erasable wall.

Celebrating 150 years of the publishing of Alice and Through the Looking Glass, the current Bubbler Artists-In-Residence, Amy Mietzel and Marcia Yapp, offered some teen groups the opportunity to put their personal touch on this community project -- mosaic chess boards to be permanently housed inside several of our libraries for public use.

Amy and Marcia made three chess boards with Teen Bubbler - two from glass mosaic and one from paint.

The two Mosaic Boards ended up as permanent installations for two Madison Public Library locations. Amy and Marsha gained the help of many people along the way, and a few teen groups got to put some time toward creating these two public game boards. They start with one blank board and one board that was already started by another group, loads of stained glass,  glass cutters, and goggles. The "M"s were marked out to let everyone know those squares need to be filled with mirror glass. No "M" means it can be any color of stained glass.

Our group started it from scratch and left for others to finish. The board now has a permanent home at Meadowridge Library.

Our group picked up where others left off and then passed it on to the next group. The board now has a permanent home at Central Library.

Sometimes its easier and more relaxing to grab some brushes and focus on keeping the squares in line. The board now has a permanent home at the Dane County Juvenile Detention Center. 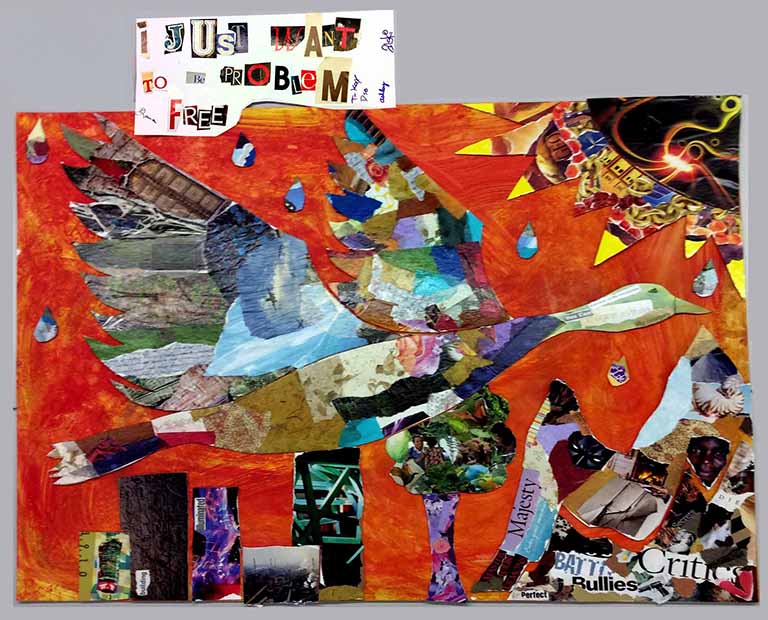 I Just Want to be Problem Free - On display in the Teen Section at Central Library through March 2016. 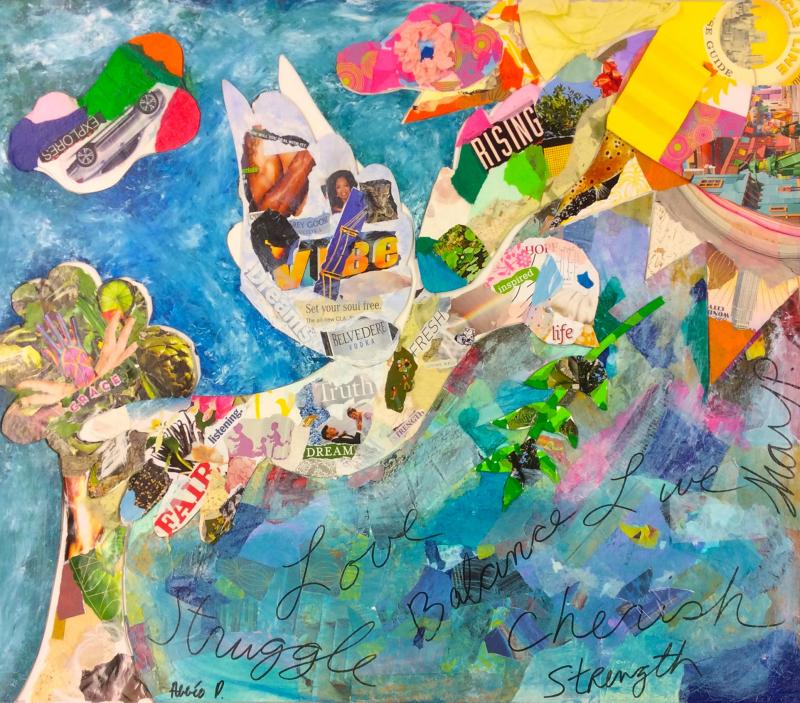 Artist-in-residence Rain Wilson led a group of Bubbler Teens in making two collaborative collages to display in the Central Library’s teen section. Each collage focuses on the image of a bird flying above and beyond all obstacles towards a peaceful and free future.

The process began with Rain’s blueprint for the final project. 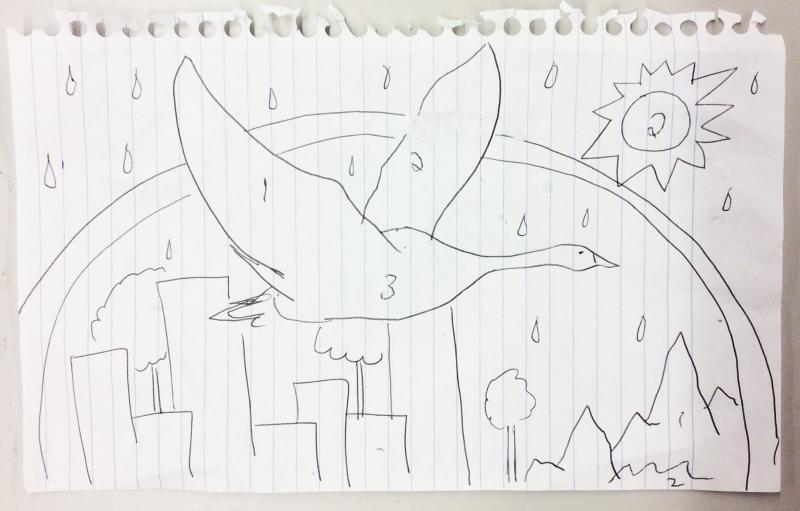 Each participant selected a piece of the scene to collage with scraps of paper, fabric, and images found in magazines. 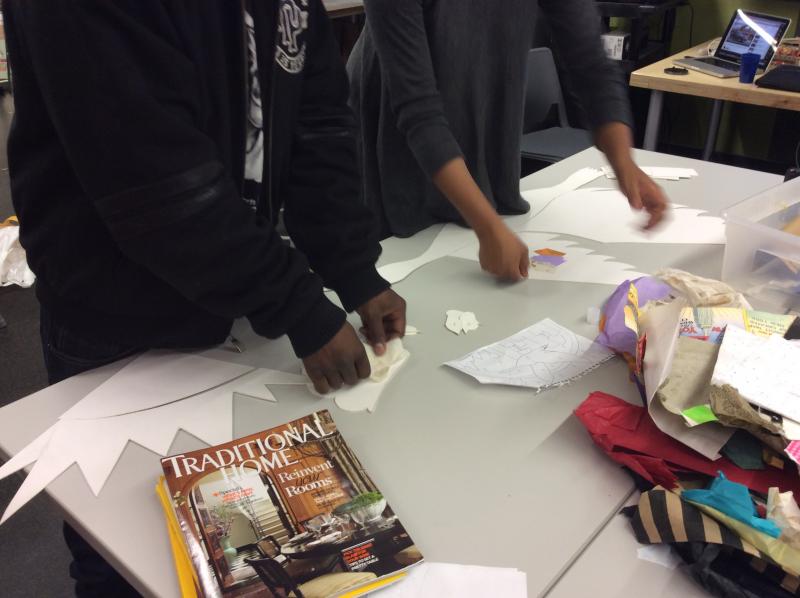 The canvas was painted and dried. 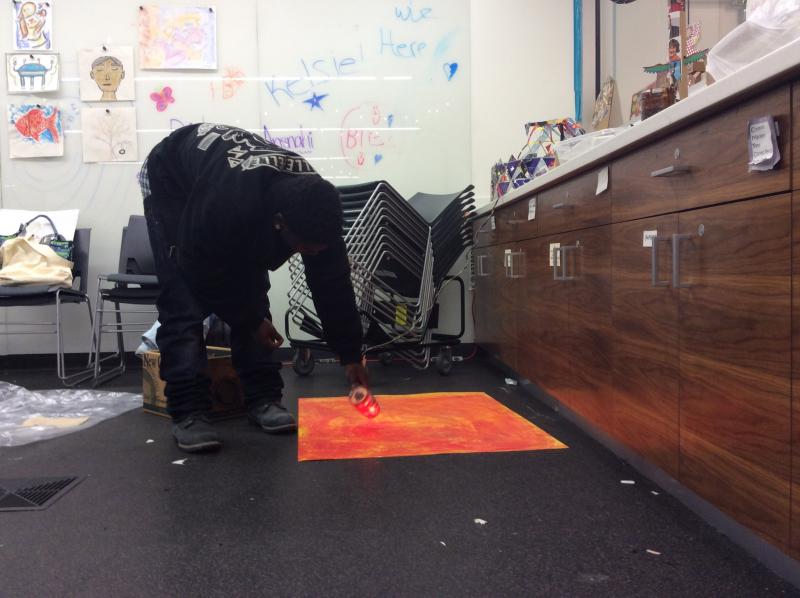 Rain helped everyone assemble the pieces. 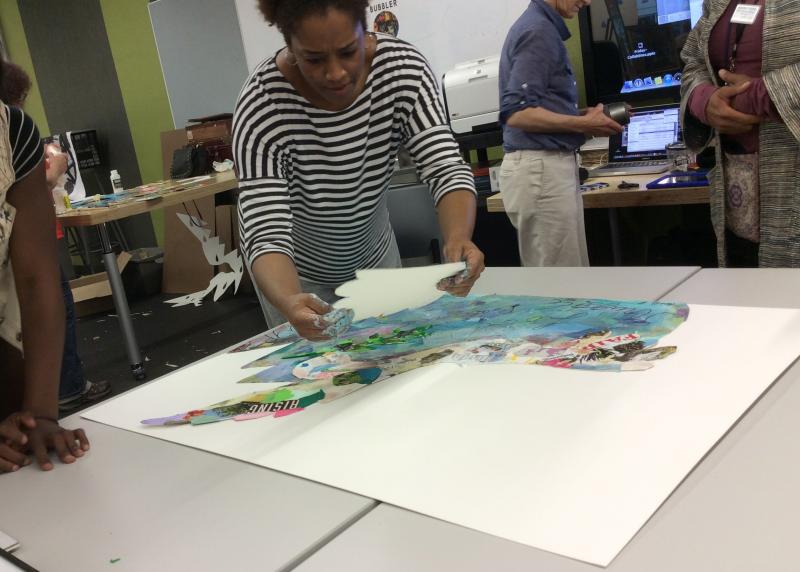 The final products were admired and displayed. Check them out at Central Library!

We made a really amazing cool thing today! 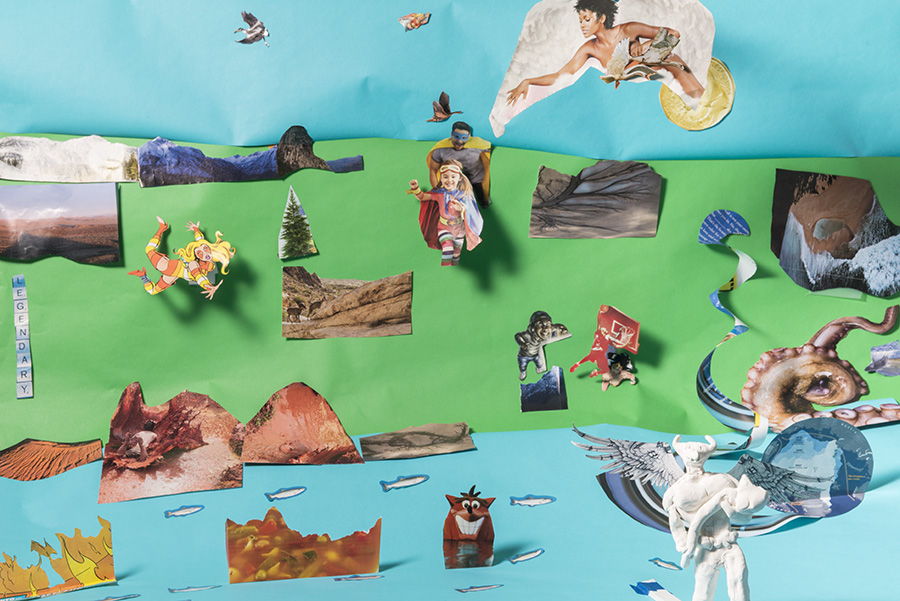 This workshop was presented by James Bellucci

Artist-in-Residence James Bellucci worked with three groups of Bubbler Teens to create and photograph storyboard dioramas. Each storyboard depicts the group's interpretation of the Greek myth of Icarus, the tragic legend of a young man who used wax and feather wings to escape imprisonment. Unfortunately, he fell into the sea after the sun melted his wings. 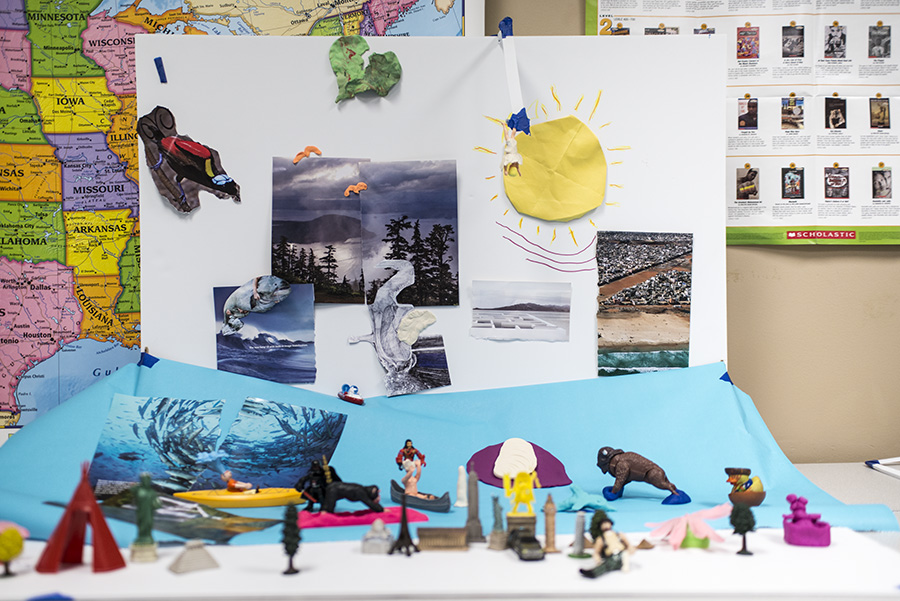 After discussing the myth of Icarus, the Bubbler Teens went to work selecting materials. 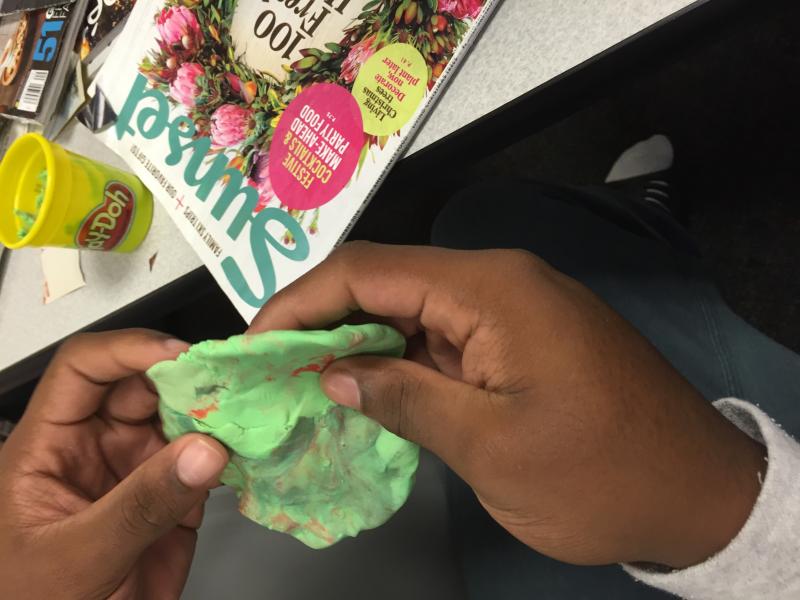 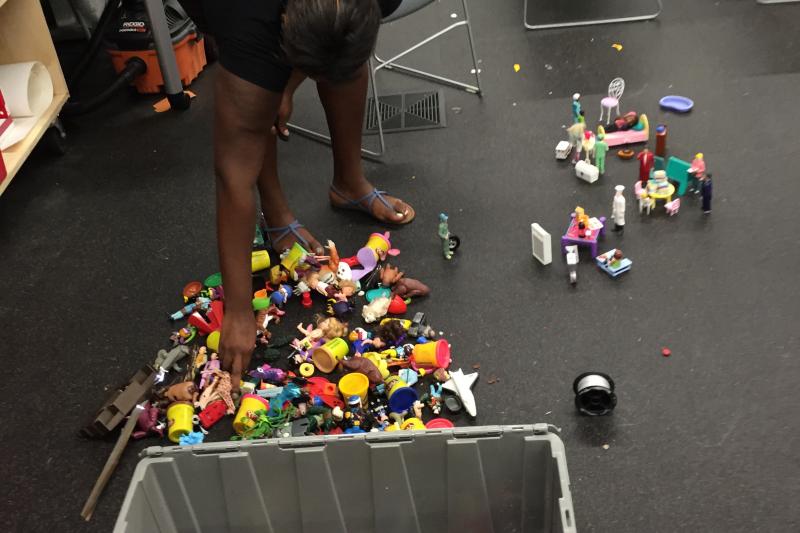 Using play-doh, images from magazines, toys, and other props, each group built their own renditions of the story. 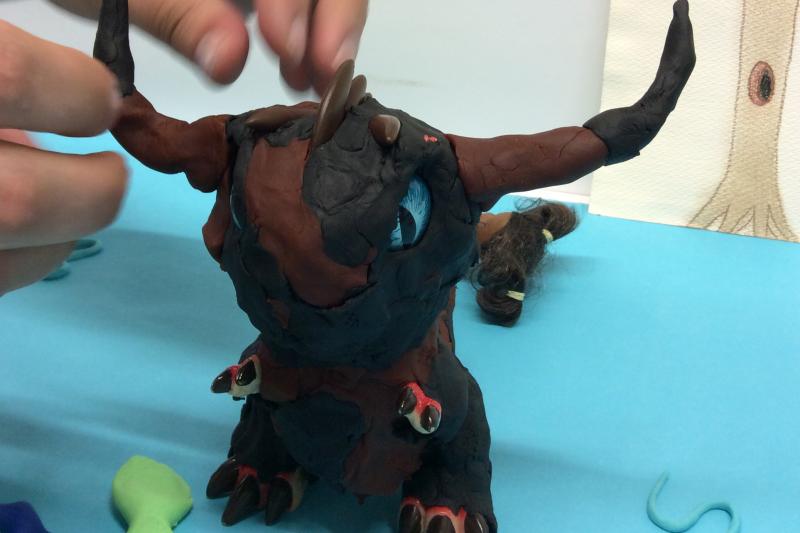 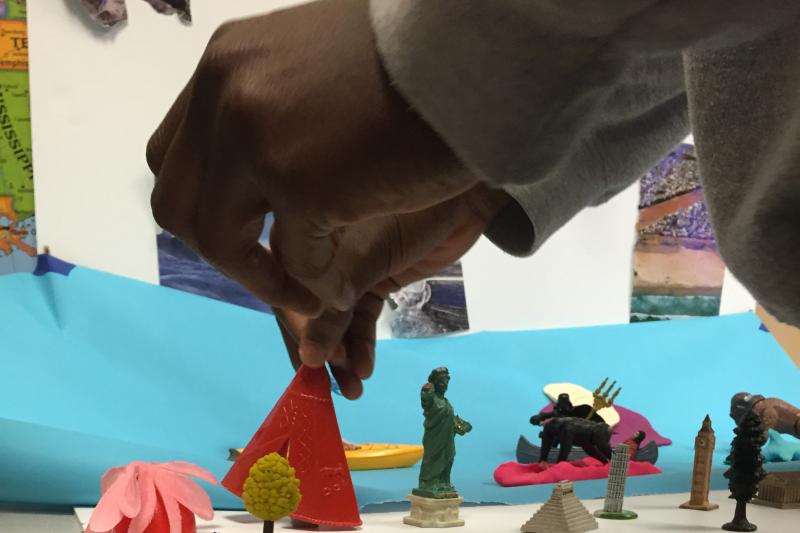 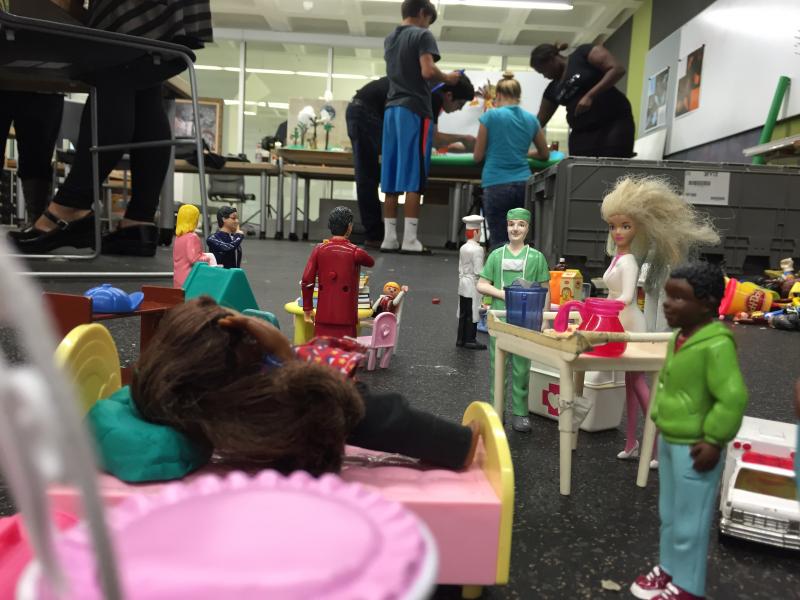 James Bellucci and the Bubbler Teens then photographed their storyboards using a variety of angles, equipment, and techniques. 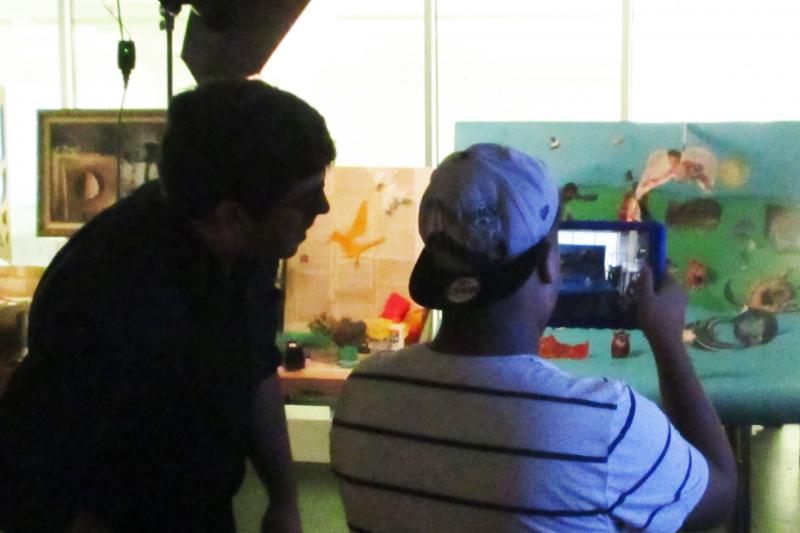 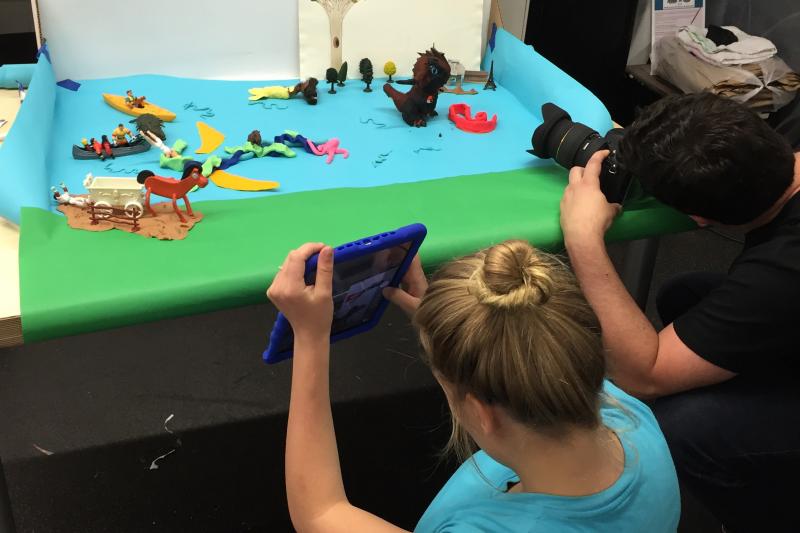 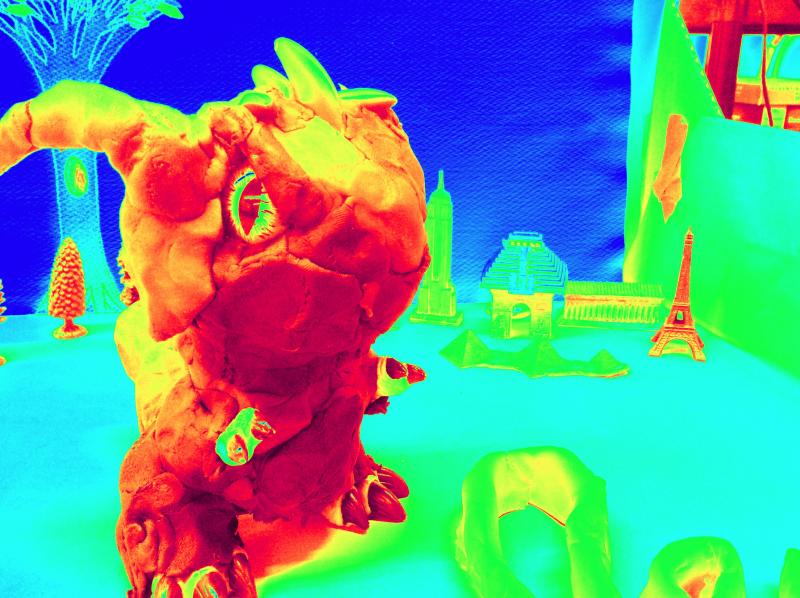 Working with Madison artist, Carlos Gacharna, teens soaked the felt from highlighters in water and mixed it with plaster to make a special homemade chalk for this engaging lesson in chemistry and light.