Drip, splatter, and spray large scale art! Painting workshops explore visual art and creative expression through the use of drawing, color, and painting, music and conversation. Starting with pencil and paper, participants are led through a design session where they learn different ways to convert a small image to a large canvas, mix colors and apply different visual techniques.

Even though the pandemic protocols didn't allow in-person visitors at their facility, when a classroom develops an idea, gains approval for a new identity, and requests assistance in seeing out a vision -- you adapt! Thanks to the flexibile efforts of teaching artist Audifax and Dane County Jail classroom teacher Tina, along with a lot of communication, zoom workshops, several handoffs of supplies, and some good old paint-by-numbers planning the students were able to complete the project in time to meet their goal for some classmates to take MMSD graduation pictures in front of their new Metro Panthers mascot mural.

Get an in-depth look at the project and its deeper impacts on students and the facility on Audifax's website.

The Story of the Metro Panther

Madison Metropolitan School District's Metro Middle and High School has existed within the Dane County Jail facility for a very long time (25 years!), and until now, it has been a hidden treasure. Though hundreds of students have graduated over the years, completing diplomas bearing the names of high schools far and wide, the world of Metro has remained largely behind the scenes and out of people's view. As the class of 2021 emerged from the shadow of COVID-19, the question was raised:  Why doesn’t Metro have a symbol of school pride?

The students of Metro take great pride in their accomplishments, and the teachers of Metro take enormous pride in their students. The time had arrived for this to manifest in a physical form. Over the course of the summer of 2021, many student-led conversations took place, and the decision was made: Metro needed a mascot. After a series of brainstorming sessions, and several ideas and suggestions (Metro Monsters? Metro Chameleons? Nahhh!)  students collectively agreed the Panther best represented what Metro is all about.

As an animal, the Panther represents strength and pride. But it was through the lens of the Marvel character, Black Panther, the idea began to take root. On the surface, Wakanda is a beautiful and majestic place, though from above it appears wild and undeveloped. However, once one breaks through the protective barrier, and looks below the surface, it is a place of creativity, prosperity and advanced technology. Like Wakanda and its people, Metro and its students are so much more than what appears on the surface.

Through the creative genius, artistic talents, and perseverance of the Fall 2021 Metro student class, and with guidance and mentorship through a collaborative partnership with the Bubbler and teaching artist Audifax, the Metro Panther classroom mural is now a symbol of school pride, a part of their learning story, and the backdrop to high school graduation photos. Go Panthers! 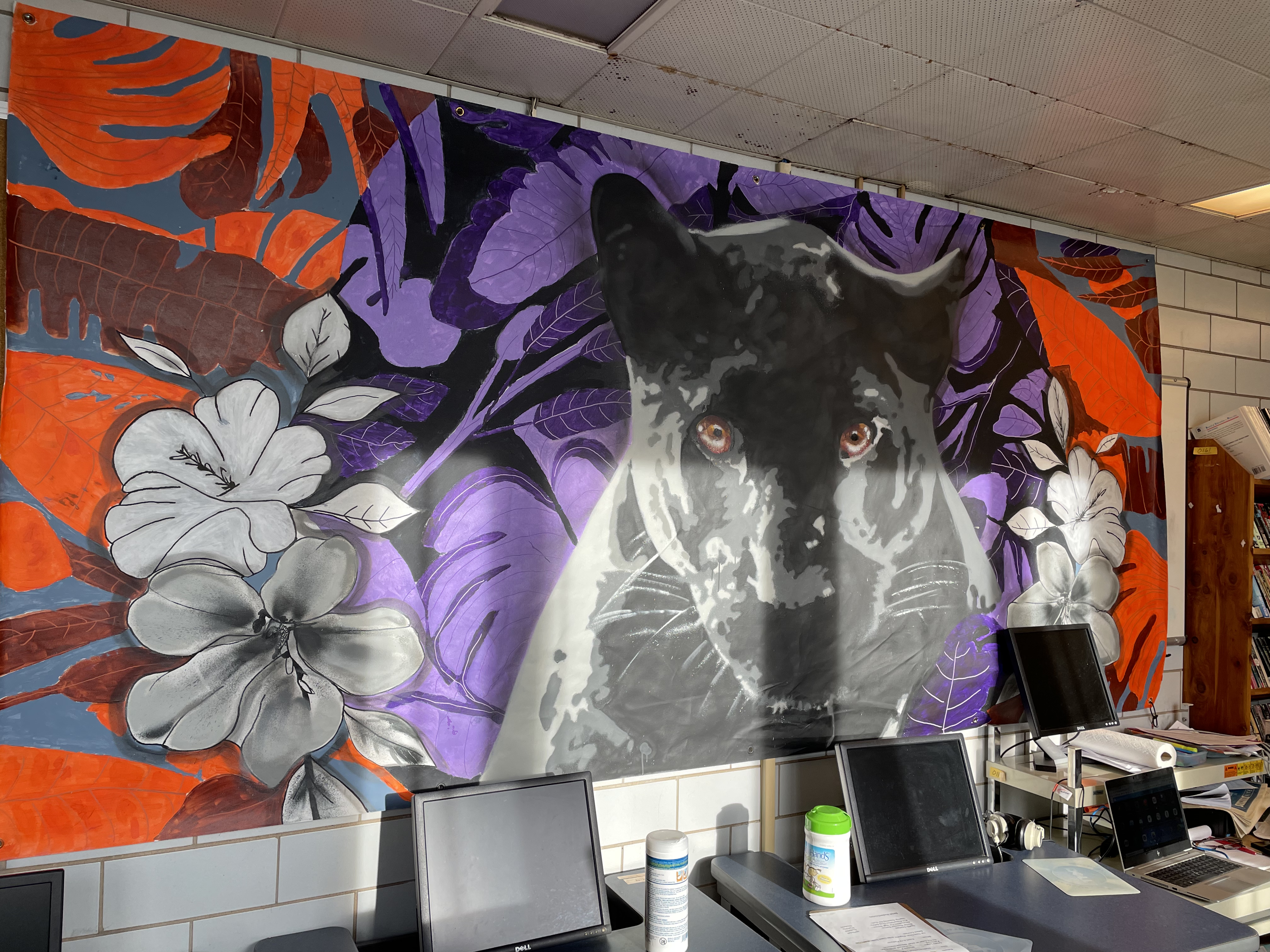 Sara Jordan and Gabrielle Javier-Cerulli teamed up to facilitate a student-led process to bring something new and eye-popping to the other recent murals already adorning the Shelter's driveway. Sara and Gabrielle are both professional art therapists practicing their work in Madison, WI, and while both are talented artists in their own right, it is the art of facilitating an inclusive process while building meaningful relationships that was shining throughout this 2-month outdoor mosaic mural project.

As students began the school year in the classroom at the Shelter Home, they had the option to join in on the development and production of the "Waves Of Change" outdoor mosaic mural 2 times each week for 6 weeks.

Starting with the creation of alcohol ink tiles, smashing the tiles, cleaning the wall, laying out the design, gluing the broken tiles, grouting the tiles and ending with sealing the wall, the staff, students and artists all contributed tremendous amounts of perspective, conversation and hard work. The design, colors and name all came from students during the low-pressure creation and development sessions along the way.

Not only has it been safer to engage outdoors during the pandemic, one of the benefits of running a group mural project outside in the community is that the neighborhood begins to join the project in various ways -- including adding tiles to the wall, bringing boxes of old tiles to use in the project, bringing out of town visitors by to check out the process, and just stopping by every few days to check out the progress.

LIKE WHAT YOU SEE? Use this map to locate this and other mosaic murals around Madison.

See more about this driveway transformation in this impact story.

Teaching artists Emida Roller and Shiloah Coley worked with teenagers at the Dane County Juvenile Court Shelter Home and the Dane County Juvenile Detention Center this summer to bring youth ideas and voices to the blank concrete walls surrounding the Shelter Home's driveway. While all previous Making Justice murals have been inside the facilities and unseen by the public, this project was a chance for youth residents to work with professionals to design and define a public-facing space for themselves and for future youth residents.

Students at Shelter took the design lead and provided most of the themes and physical effort, but the students at Detention also took ownership of the project quickly - having the idea to tie in elements from their previous summer workshops with teaching artists Carlos Gacharna and Audifax into the design. Old English lettering from Carlos’ workshop reading “We Matter” appears at the top of the mural, and a design from a student at Detention done in Audifax’s abstract painting workshop was translated into the jersey worn by the young man pictured looking into the mirror, seeing his future self. While students from Detention couldn't participate in painting the wall, students at the Shelter Home were able to safely work outside with Emida and Shiloah to remove the overgrown vegetation from the hill above, then clean, prep, and paint the wall.

Learn more about how all of the pieces came together for this project in the library IMPACT STORY - Bubbler in the time of Covid: Making Justice makes it work.

During a week-long residency over the detention classroom winter break, Wisconsin artist, Jerry Butler, worked with teenagers inside the Dane County Juvenile Detention Center to bring color and warmth to the "intake room" in which all residents sit for the period of time while they are checked into the facility from the Juvenile Reception Center. This is the room where youth change out of their personal clothes, turn over their belongings and receive an orientation to the detention facility. This mural is now the backdrop that all incoming youth will view while security officers sit in front of it throughout the intake process.

After a 90-minute design session the week prior, Jerry came back to the facility to work with the teen residents over 5 days to grid and scale the final design from paper to wall, and then to apply the paint. Youth residents joined for 30 minute shifts, and one young person individually worked to design, scale, and paint a hole in the wall saying, "Even though its not real, I just think it would be really nice to see some fresh air before going into the secure facility. I call it the 'fresh air hole'."

Read more about the project in this Wisconsin State Journal article!

Made possible with the financial support from:

During a week-long residency over Spring Break 2019, Wisconsin artist, Audifax, worked with teenagers inside the Dane County Juvenile Detention Center to transform the giant wall in the corridor all residents walk through on their way to and from juvenile court appearances.

After a 90-minute design session the week prior, Audifax came back to the facility on Monday to work with the teen residents over the next 5 days to trace projected designs and paint the entire wall in shifts of 2 or 3 students at a time. To the sounds of countless meaningful conversations and various choices of music, the teens took on the pieces that most excited them or fit their skill sets the most. Due to the nature of the facility, teen residents are only housed on a temporary basis so there were some kids that took part in every session, but also kids that were only there for the beginning or the end of the project.

Audifax says, "where this mural sits in the building, being the last and first thing the teens see before and after court, I wanted to bring a peaceful and powerful image - a reminder to reflect and find peace and clarity within. The central faces are split down the middle and show regardless of who you are (gender, race, background), change and a desire to create a better life for yourself begin with you. First get to know and respect yourself and positivity can be shown to and shared with others. The surrounding mandala image was chosen because of their representation of inner peace throughout the ages. Waves at the center stand for the ripple effect in the power in being authentic with yourself, radiating to those around you."

Read more about the project in this CAP TIMES article!

Made possible with the financial support from: 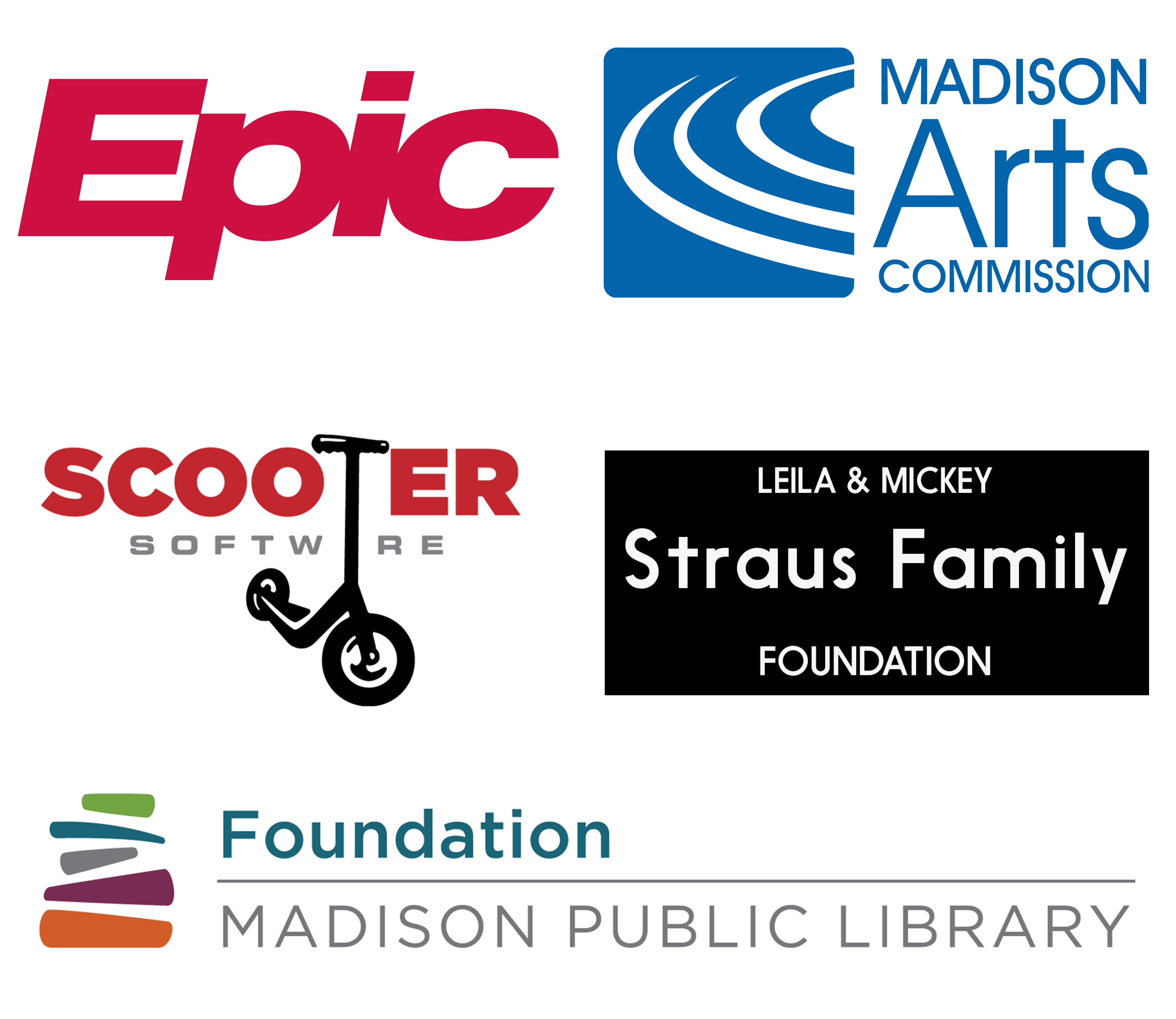